A strong composition is crucial to a successful piece of art. It's what will attract a viewer's eye, and what will hold their attention once they take a closer look.

It can mean the difference between an action-packed piece of art and a solemn, contemplative one. But how do you make a composition convey the mood you want, and what is it that makes a composition successful?

There are a many long-standing rules regarding what makes a good composition, such as the Golden Ratio, the Golden Spiral and the Rule of Thirds. But they aren't really rules at all!

Think of them as suggestions… or better yet, as optional templates. Traditional methods like these are just one answer to a problem which has an infinite number of solutions. Their purpose is just to offer a simple method for an artist to use to make a more pleasing image.

I'll discuss some of these techniques, explain why they're successful and how you can use that knowledge to make a better image.
To begin, all you really need to know is this: a good composition is nothing more than a pleasing arrangement of shapes, colours and tones. That's simple enough really. Chances are, most of you can make a good composition with your eyes closed.
​
But we don't want good compositions, we want great compositions! We want to be masters of composition, bending it to our will. In order to do that, we need to understand the basic properties of composition...
By altering one of these squares, even slightly, I've created a much more successful composition in the second image. As simple as the image is, it already has a sense of motion, and depth. How? 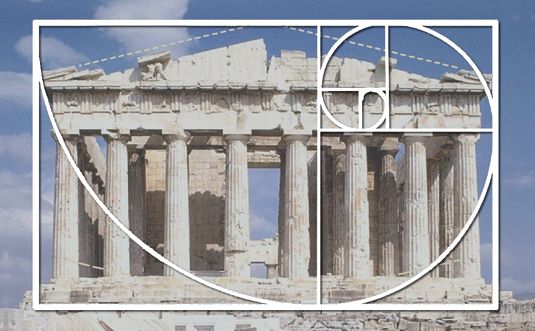 Let's look at the Golden Ratio. The idea was started by the ancient Greeks, who were strong believers in the Platonic concept of ideals.
They believed that all things, both tangible and intangible, have a perfect state of being that define them.

They also felt that one should always strive toward achieving this ideal state, be it in mathematics, one's physique, politics or aesthetics.
Like implied lines and contrasting values, colour can be used to draw the viewer's eye to anywhere we want
​
Greek mathematicians, after repeatedly seeing similar proportions in nature and geometry, developed a mathematical formula for what they considered an ideal rectangle: a rectangle whose sides are at a 1:1.62 ratio.

They felt that all objects whose proportions exhibited this were more pleasing, whether a building, a face or a work of art. To this day, books and even credit cards still conform to this ideal.

Here Dulac has placed the column and the horizon line perfectly along a line of thirds. But what if he didn't?

The Rule of Thirds works because it demands that the artist makes one element more dominant than another. This dominance creates an imbalance, and an imbalance of any sort will always attract the viewer's eye.
​
AdvertisementBisecting an image perfectly in half creates the least amount of interest, because everything is equally balanced.
Look back at those black and grey squares. The first composition is boring because it's too balanced. Making one area of your composition more dominant creates tension, and therefore adds interest. It also makes your eyes move around the canvas more to compare all of these relationships.

The Rule of Thirds seems to work its way into most aspects of picture making, and value is no exception. When constructing compositions, I tend to think in general arrangements of foreground, middle-ground and background.
​
To heighten the relationship between these three depths, I try to restrict each to a range of value, favouring black, white or grey. For instance, you can let the background predominately be white tones, the middle-ground predominantly greys and the foreground predominantly black tones.

Of course, any arrangement of these three values will work. By restricting your values in these areas you reinforce your image's sense of depth and make the silhouettes very easy to read – and that legibility is important.

Muddy values hurt the viewer's ability to discern shapes, especially at a small scale. That's why you'll see this technique used so often in trading card art. When your image is just a few inches tall, high-contrast compositions work especially well.
Triptych value schemes like this are readily apparent in the works of the Old Masters, particularly in the engravings of Gustave Doré.
His paintings all show different arrangements of black, white and grey to emphasise the difference between foreground, middle-ground and background.

​09. The benefit of contrast

Imbalance can create a more exciting flow to your composition, but it can also add drama. The next time your painting isn't exciting enough, try tipping the camera angle.
Even the slightest tip to the horizon line can turn a mundane scene into a cool action shot. Experiment with the psychological impressions that different camera angles create.
Straight, this painting lacks real excitement. The bricks, rain and hair all create simple vertical lines, and don't do much to enhance the drama of the piece. Tipping the image gives it a whole new feel.
​
Suddenly it appears like the woman is being thrust against the wall. There's also more of a sense of weight to their poses

​12. Putting it all together

A good composition is one where the artist controls the movement of the viewer's eye to a beneficial result.  We can do this by a number of means, such as reinforcing the focal point with the Rule of Thirds, implied lines, contrast of value and selective colour saturation.Putting all of these tools into action in a single piece, Jean-Léon Gérôme's Duel After a Masquerade Ball is the perfect example of using all compositional devices to your advantage. 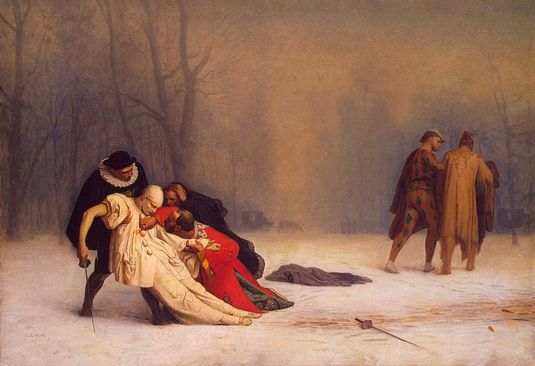 Your are being challenged to create a successful collage composition using the concepts from above. You will take images that were created for an intentional purpose and flipping the script to tell a completely new story.

Take the following into account when you are creating your collage
•WHAT STORY DO YOU WANT TO TELL?
•WHAT IS THE MOST IMPORTANT THING IN YOUR NEW IMAGE / WHAT DO YOU WANT THE VIEWER TO NOTICE FIRST? HOW WILL YOU GET THE VIEWERS ATTENTION? (CONTRAST, REINFORCING FOCAL POINTS, RELYING ON THE RULE OF THIRDS)
•WHAT IS THE SECONDARY FOCUS & HOW WILL YOU DRAW THE VIEWERS ATTENTION TO MOVE IN THAT DIRECTION ( IMPLIED LINES?, GOLDEN RATIO?)
•ARE YOU USING THE RULE OF THIRDS? WHY OR WHY NOT?
•HOW DOES YOUR COMPOSITION HELP TELL THE STORY OR TAKE AWAY FROM THE INTENDED STORY?